While each has its place in the ice-making world, there is a hierarchy here that makes one thing clear: Most establishments should consider an air-cooled ice machine first. These all-purpose units fit most anywhere. However, if special circumstances rule one out for your facility, you might want to consider a remote ice machine or a water-cooled ice machine.

To help you choose what’s right for your operation, here’s some information on each type.

An Ice Maker that Breathes Like You and Me 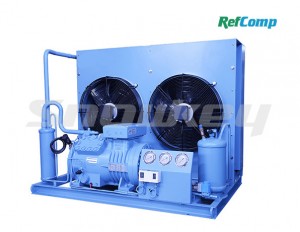 Most places that need large-scale ice production, including hotels, convenience stores, and restaurants. Does produce slightly more heat and noise than other two types.

An air-cooled condenser uses fans to blow cooler ambient air across the coils through which the system’s refrigerant runs, a process that cools that fluid enough to allow it to cool the evaporator plate. An under counter model of air-cooled commercial ice maker will typically draw air in – or “breathe” – and push it out through a grill on the lower part of the front of the machine. Modular or head units typically complete that process on either the left or right side of the box, though some have a grill for that purpose on the front.

Advantages of an Air-Cooled Ice Machine:

- Install is much easier than with other types.

- These commercial ice makers are typically significantly cheaper than others.

- Utility costs are much cheaper than with other designs.

Drawbacks of an Air-Cooled Ice Machine:

- Heat and noise of condenser is held in the area with the ice maker.

- Undercounter units can draw floor dust into the refrigeration system, while modular units must cool using hotter air higher up.

Putting the Noise and Heat of a Condenser in its Place 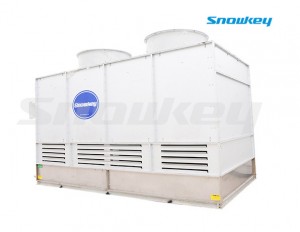 A remote ice machine is great for facilities that need to eliminate the heat and noise produced by an ice maker, especially those operating multiple systems in the same area.

A remote ice machine is actually an air-cooled ice machine with some really long refrigerant lines. In remote ice machines, the ice maker is typically purchased separately from the condenser and the two are connected by those long lines. That allows the condenser, which produces the majority of the noise and heat put out by the system, to operate in a different space, typically outside. That’s a good thing for cramped kitchens or hotels that don’t want the ill effects of an ice machine filling the halls, particularly when they operate several of those systems.

Several remote ice machines can be run with a single condenser rack system, which puts several condensers into one unit. The efficiency of a remote condenser for a commercial ice machine will vary with the weather outside. Cold and cooler conditions will be great for it because it will have little to do to cool the refrigerant. Meanwhile, it may struggle to achieve proper temperatures in hot and dry climates.

Advantages of a Remote Ice Machine:

- Puts heat and noise of condenser outside.

- Can be fairly efficient in areas with cooler climates.

- Several ice makers can be run off one rack system.

Drawbacks of a Remote Ice Machine:

- More costly to install, with holes through walls and a pad needed outside for remote condenser. 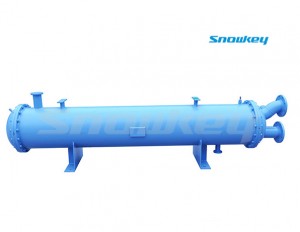 Facilities, particularly hotels, where heat and noise from an air-cooled ice machine need to be eliminated. However, it is prohibitively impractical in most settings.

The negative side of a water-cooled ice machine will outweigh the positive for all but a select few operations. That fact is evidenced by the type’s small foothold – it accounts for less than 10 percent of total ice maker orders – in the market. However, it can be a great option for large-scale ice-producing operations like sprawling hotels and ice houses when used with a water cooling tower on the exterior – typically the roof – of the building.

Air-cooled ice machines use flowing water to cool the condenser coils and the refrigerant inside. If a cooling tower is available, water circulates through a trough around the condenser coils, drawing the heat out of the refrigerant through the metal. It then circles through the tower and runs through its own coils, cooling through exposure to the outside air before it’s circulated through the system again. When a cooling tower is not present, these systems must have two separate water lines and one of them will run nearly constantly to cool the coils. That can boost utility bills by hundreds of dollars per month and wastes a lot of water. So much so that some municipalities and even whole states have actually outlawed them without a tower.

Advantages of a Water-Cooled Ice Machine:

- Not impacted by high temperatures that may reduce the efficiency of an air-cooled ice machine.

- Produces less heat and noise in the ice-making area.

Drawbacks of a Water-Cooled Ice Machine:

- Uses a tremendous amount of water if not used with a cooling tower.

- If not used with a tower, cooling water line should be filtered and will require a new cartridge frequently. If not filtered, particulates in water will likely cause regular problems in the refrigeration system.

- Illegal in some areas because of high water usage.

© 2014. Snowkey Australia Pty Ltd. All Rights Reserved.
Brisbane Web Design by StudioGrfx
Back to Top
Snowkey provides everything you need to make, handle, package and store ice. Call us today on 1 300 ICE ICE (1 300 423 423)